Of course the oil industry must change. But if we turn the taps off now, we risk turning the lights off too. 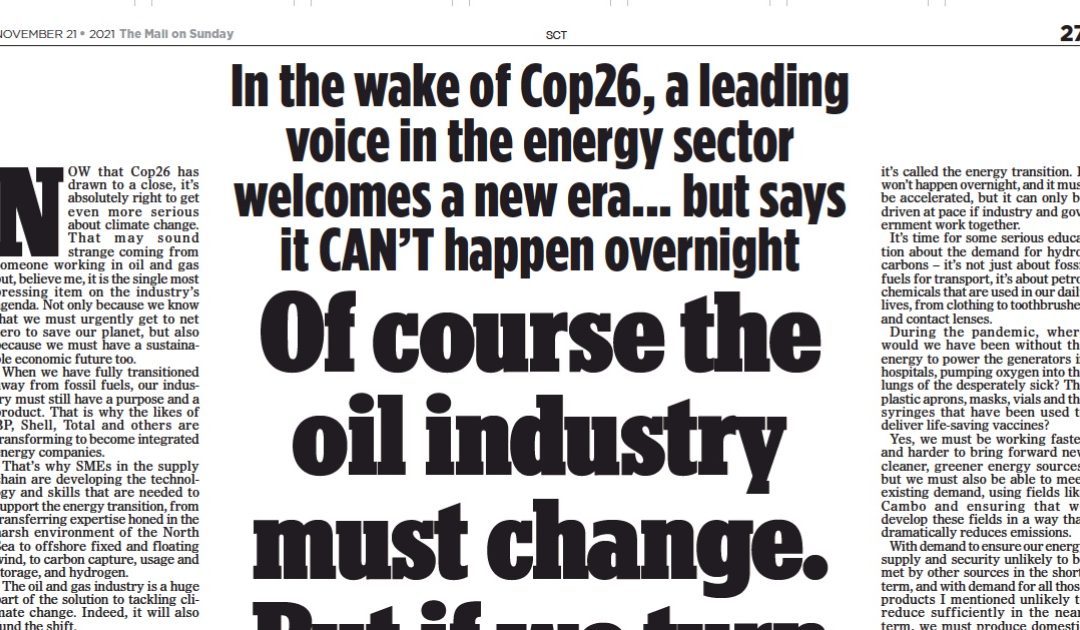 In the wake of COP26, a leading voice in the energy sector welcomes a new era… but says it CAN’T happen overnight.

Now that COP26 has drawn to a close, it’s absolutely right to get even more serious about climate change. That may sound strange coming from someone working in oil and gas but, believe me, it is the single most pressing item on the industry’s agenda. Not only because we know that we must urgently get to net zero to save our planet, but also because we must have a sustainable economic future too.

When we have fully transitioned away from fossil fuels, our industry must still have a purpose and a product. That is why the likes of BP, Shell, Total and others are transforming to become integrated energy companies.

That’s why SMEs in the supply chain are developing the technology and skills that are needed to support the energy transition, from transferring expertise honed in the harsh environment of the North Sea to offshore fixed and floating wind, to carbon capture, usage and storage, and hydrogen.

The oil and gas industry is a huge part of the solution to tackling climate change. Indeed, it will also fund the shift.

This is an industry that has given so much to Scotland and the UK, in taxes which have paid for our public services, in jobs which have supported livelihoods and generated spend in local economies, in the advancement of skills and technology and also in the support of education, sport, the arts and the third sector. The stark reality is that until we have reduced the demand for hydrocarbons and found a solution to ensuring energy supply so the lights don’t go off, we cannot simply turn off the taps in the North Sea tomorrow.

I’m old enough to remember the energy shortages of the past, when the coal miners went on strike. I was a teenager back then and I remember the lights going out, the central heating thermostats going off and having to light candles, gas lamps or take a torch to see whilst getting into bed.

I was born in West Yorkshire but married an Aberdonian and moved to the North-East. Back in 1988 I was working in the comms room of the Aberdeen Royal Infirmary, at the time of the Piper Alpha disaster, when an explosion ripped through an oil platform killing 167 men. I took the first telephone call to ARI when Piper went up and my eight-hour shift became a 17-hour shift, like many others who were involved on that fateful night.

I remember sitting in my car sobbing the next morning at what I had just experienced. In the days and weeks after, it was like a veil had fallen over Aberdeen. The city was shrouded in sadness. It was during this time that I decided I wanted to work in oil and gas, to try to help make a change, to make it safer and more gender diverse.

Through sheer hard work and a little luck, the company I set up supports the industry, the economy and a considerable number of jobs. But one thing I have come to accept, living and working in the North East, is that when the oil price drops, the ripple effect across the whole economy, on jobs and families, is devastating.

Stopping Cambo will not just impact on jobs in the industry; the knock-on impact means shops, restaurants, taxi drivers will all suf­fer. It’s also worth pointing out that the disposable income generated by the industry does not just benefit Aberdeen, as workers come from other areas up and down the UK.

Another element of job losses or uncertainty is that people downsize their homes, impacting on the housing market and property prices, they take their children out of private education and nurseries as they can no longer afford the fees.

Commercial property in Aberdeen looks very dif­ferent today due to the downturn. Big buildings on the outskirts of Aberdeen are being vacated to smaller ones in the city centre. What’s going to happen to these bigger buildings if more jobs are lost? There’s already considerable downsizing going on. I’ve experienced many downturns as a result of the cyclical nature of our industry. But the downturns get longer, and their bite gets deeper.

If we switch off oil and gas and move to green projects too quickly, before they are economically viable, we won’t just have another downturn. We’ll have an economic disaster, and not just in Aberdeen.

I’ve felt for a long time there is a disconnect between the Central Belt and the North-East, which is now getting wider. Political rhetoric, such as ‘Stop Cambo’, is damaging and disingenuous.

In the North-East, we understand that we’re on a journey. That’s why it’s called the energy transition. It won’t happen overnight, and it must be accelerated, but it can only be driven at pace if industry and government work together.

It’s time for some serious education about the demand for hydrocarbons – it’s not just about fossil fuels for transport, it’s about petrochemicals that are used in our daily lives, from clothing to toothbrushes and contact lenses.

During the pandemic, where would we have been without the energy to power the generators in hospitals, pumping oxygen into the lungs of the desperately sick? The plastic aprons, masks, vials and the syringes that have been used to deliver life-saving vaccines?

Yes, we must be working faster and harder to bring forward new cleaner, greener energy sources, but we must also be able to meet existing demand, using fields like Cambo and ensuring that we develop these fields in a way that dramatically reduces emissions.

With demand to ensure our energy supply and security unlikely to be met by other sources in the shortterm, and with demand for all those products I mentioned unlikely to reduce suf­ficiently in the nearterm, we must produce domestic hydrocarbons. The alternative is to import them at a much higher cost to the environment.

Losing out on the jobs and technological innovations which can be derived from Cambo and other fields is not only economic suicide, it will also impact on our ability to transition at scale and at pace.

Decimating a supply chain that can help deliver the energy transition at this time before the new green opportunities and jobs exist is simply cutting off our nose to spite our face. We can’t ignore the economic realities of the times as we try to rebuild from the pandemic. Not developing Cambo is not the answer.

This industry is transitioning. If people could only see the things I’m seeing – the innovation and the transformation – they’d be blown away. It’s time for government and industry to come together to appreciate this, educate the wider public and have a debate on how we use the oil and gas industry to tackle the climate emergency, rather than simply throw it all away.

Switching off oil and gas today would see the fatal erosion of our knowledge base and, one of our greatest strengths, our skilled people who develop the technology and services which are exported all over the world.

I don’t want my grandchildren to ask me why I didn’t do anything about climate change. I want them to see it was the oil and gas industry, long part of the problem, that became the solution. That through its innovation and digitalisation, it drove the energy transition.

As an industry, we’re working hard to deliver net zero and are all on board supporting the new era of energy. Just let us play our part, rather than curtail us with inaccurate rhetoric.

Originally published in The Scottish Mail on Sunday, 21 November 2021